US election 2020: Millions of Americans will decide on Tuesday who will move into the White House as the most powerful politician in the western world. President Donald Trump (74) is running for a second term, his challenger is former Vice President Joe Biden (77).

The Republican Trump wants to continue to rule with Vice President Mike Pence (61), the Democrat Biden in the event of an election victory with Senator Kamala Harris (56). She would be the first woman and first black woman to hold the office of Vice President. The House of Representatives and around a third of the seats in the Senate also vote. Here is an overview of the most important information.

Trump vs Biden: How does the US electoral system work?

US voters can only vote indirectly on who will be the next president. Your vote decides on the composition of the Electoral College, which then elects the President. In 48 of the 50 states it works like this: The candidate who can secure a majority receives all votes.

An example: If Trump wins Florida with 50.1 percent of the vote, he would get the votes of all 29 electorates in the state, Biden would go completely empty-handed. Americans therefore speak of the principle of “winner takes all” (everything for the winner). Only in the two small states of Nebraska and Maine are the votes of the electorate distributed approximately proportionally.

What about the electorate?

The number of electors in a state corresponds to the number of US senators and congressmen sent from there and is thus roughly based on the number of inhabitants. The electorate will vote 41 days after the presidential election, this year on December 14th. They are guided by the result in their state - in many states, the electorate would otherwise face a penalty. To become president, a candidate must win at least 270 votes. The official result will not be announced in Congress until January 6th.

Because of the indirect voting system, it is possible that a candidate could get the most direct votes but still lose the election. That was the case in 2016, for example. At the time, more Americans voted for Hillary Clinton, but Donald Trump was able to secure a majority of the electorate through the states he won. 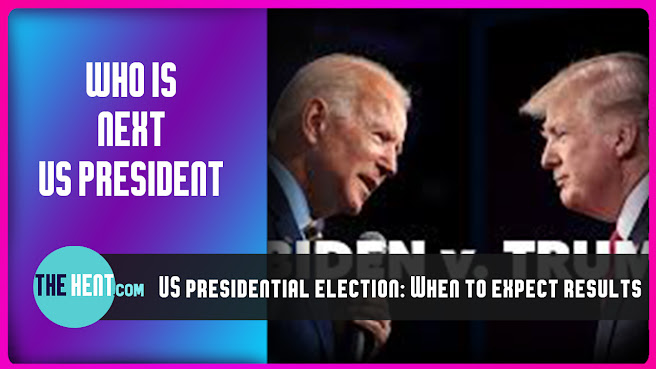 Why is voting on a Tuesday?

Election day has been legally established as the Tuesday after the first Monday in November since 1845. Election day is a normal working day. There are historical reasons that it falls on a Tuesday in November. In the 19th century, most Americans still made a living from agriculture. In spring and summer, many farmers were busy tilling their fields. In November, however, the harvest season was over in most areas, but the climate was still mild enough to travel to the nearest polling station by horse-drawn carriage or on foot. Sunday was not an option for travel or voting, because that was when you went to church.

US election: when will it be voted?

The United States spans multiple time zones. The first polling stations in the northeastern state of Vermont will open at 5 a.m. (11 a.m. CET). From 6 a.m., many states on the east coast will follow, then the center of the country. In the west coast state of California, polling stations open at 7 a.m. (4 p.m. CET).

Postal voters could vote weeks before the election. In addition, most states offer the possibility of voting in polling stations in advance. In 2016, around 40 percent of the votes were cast in these two ways before election day. This year it seems to be even more: a few days before the election, according to researchers, around 80 million Americans had already voted.

Initially, every one of the approximately 330 million US citizens who is at least 18 years old is eligible to vote. Residents of U.S. suburbs such as Puerto Rico are excluded. Most states also do not allow inmates or people convicted of serious crimes to vote. According to a civil rights group, this affects around 5.2 million people. All others must register with the responsible electoral office before voting.

Why is the eligibility to vote rather low?

According to the Election Commission (FEC), around 137 million Americans voted in the 2016 presidential election. Measured against the population of voting age of around 245 million, this corresponded to a voter turnout of almost 56 percent. This year voter turnout is difficult to estimate because of the pandemic. For the traditionally rather low turnout, high registration hurdles are blamed in many states, but also the frustration of voters. Another reason: In some states, such as California, traditionally the same party always wins.

Which states are particularly important?

Florida is considered the jackpot: with 29 voters, it is one of the most contested states. This is followed by the traditional “battleground states” or swing states, those states that sometimes vote for a Republican and sometimes for a Democrat. This includes Pennsylvania (20 votes) and Ohio (18), as well as Michigan, Wisconsin, and Minnesota (together 36 votes). Current polls also suggest open races in Georgia (16), North Carolina (15), and Arizona (11). It would be a real earthquake if Biden were to win Texas. The large state with 36 votes has been going to the Republicans for decades - but some polls give it at least little chance there.

Many other states are hardly contested. For the Democrats, for example, the states on the west coast and those in the northeast are a safe bank. Republicans tend to do particularly well in the center of the country, the Midwest and the South.

Trump or Biden: Why is the presidential election so important?

No office in the western world can match the wealth of power of the US president. The president is the head of state and government and the commander-in-chief of the armed forces. He has largely a free hand in foreign policy. The president can also make a lot of decisions in many other areas of politics - from military operations to the imposition of punitive tariffs and the regulation of immigration and environmental protection. In addition, he can intervene at least temporarily in policy areas that are otherwise reserved for the legislative function of Parliament through so-called “executive orders”. But he needs Congress for measures that cost money or change laws.

When can the election result be expected?

In the past presidential elections, the winner was usually determined on election night. However, experts assume that this year, because of the pandemic, significantly more people will vote by postal vote. Therefore, the counting of votes could be significantly delayed - by a few days or even longer.

The US franchise is primarily determined by the states. In some places, ballot papers sent on election day can be counted, and the counting of postal votes is more complex, for example, because of the need to compare the signatures of the voters. A few thousand votes could decide the outcome of the election in a country. Officials in several states, including the swing states of Pennsylvania, Michigan, and Wisconsin, have warned the count could last until Friday, November 6th.

In addition, polls show that more Democrats than Republicans want to use postal voting. Therefore, the first counting results from the polling stations could see Trump in the lead in some places, but the counting of the postal voting documents ultimately help Biden win. In individual states, there could also be lawsuits and demands for a recount. In 2000, for example, the result in the state of Florida, which ultimately also decided on the presidential election, was only known a month after the election. The lawsuit went to the Supreme Court in Washington.